Wiggly worms!
Earthworms are fascinating to preschoolers.  FAS-CIN-ATING.
Whether the little learners are brave enough to actually touch the worms, or would rather observe from the sidelines, worms are a great tool to use to teach across all learning areas in the classroom.  My class has been feeding worms to baby birds in our newest sensory bin, learning about how worms help the soil, and singing our favorite worm song {see below for the words!}, so our cumulative activity to tie it all together was to investigate REAL WORMS.

Affiliate links are included in this post.
There are many fiction books about worms, spring, and baby birds that preschoolers will love to read, but the best nonfiction book that we read about what worms do in preschool was Wiggly Worms at Work by Wendy Pfeffer. There is a lot of on-level, easy to understand information in the book that my preschoolers easily picked up on.
Before reading, create a KWL chart to record what you KNOW, what you WANT to know (or WONDER), and then what you LEARNED.  I make quick KWL charts in preschool on chart paper with lots of drawings.  Most of the time, they include what we know and what we have learned.  We usually chat about what we wonder. 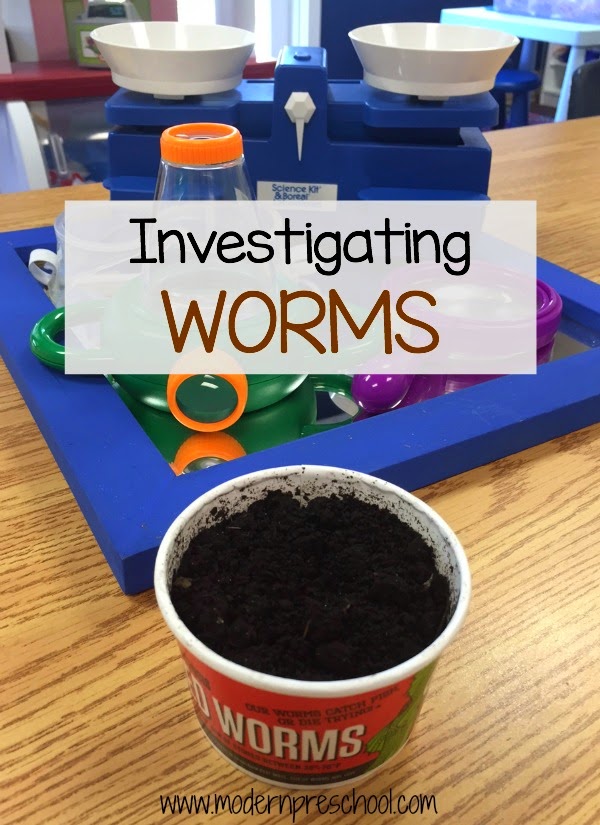 There are so many ways to explore worms in preschool!  Science and math activities top the list because learning through play and hands-on experiences are some of the best ways that young children learn and remember.  Experiences need to be meaningful.  And let’s just say when you dump 30 worms all over your table in the classroom, it’s all that any of the preschoolers can talk about…for days!
SUPPLIES FOR WORM INVESTIGATING:
I dumped the worms on to 3 different trays on the table in the classroom.  In that tiny container pictured in the post above, there were 30 worms.  The kids squealed in delight and excitement (and some in horror) and immediately began delicately touching the worms.  The magnifying glasses and shovels were used a lot at the beginning while the kids warmed up.  After about 10 minutes, there were hands {and worms} everywhere!
We used our scale to compare weight of some objects around the room to a worm.  My class figured out that 3 connecting building blocks weighs the same as 17 worms!  Three baby plastic animals weighs 13 worms.  A big scoop of dirt and worms is lighter than a scale full of wooden blocks.  The possibilities were endless! 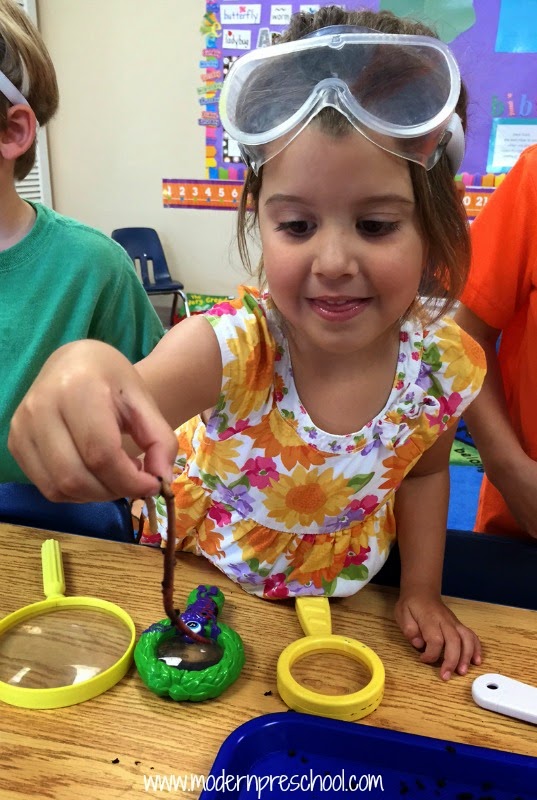 My preschoolers love to sing!  Finger plays are their favorite.  This song (author unknown) can be sung to the tune of “I’m a Little Tea Pot” and it’s easy for preschoolers to learn – and sing over and over and over again!
I’m a little wiggle worm, watch me go.
I can wiggle fast, or very very slow.
I wiggle all around and then I go,
Back into the ground to the home I know!
At this point in the song, my class yells “It’s dirt!” each time we finish singing.  Let’s just say that this song was sung to the worms many times! 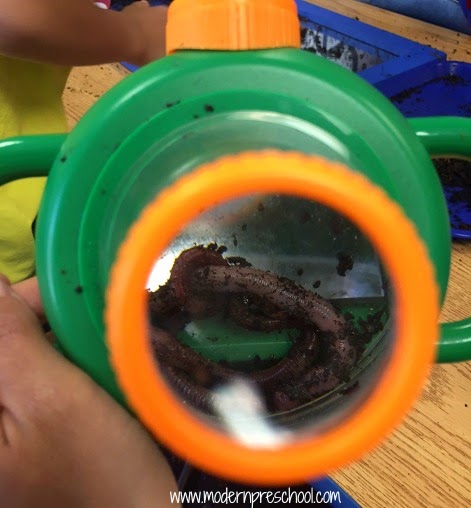 The 2 way bug viewer above turned out to be the perfect way for the preschoolers who weren’t quite ready to touch the wiggly worms to still observe them up close!  At first, I was adding one worm and passing around the bug viewer.  Later on, kids were putting handful of worms into the bug viewer and  discussing with each other what they were observing.  These viewers are perfect for preschool-sized hands and fingers! 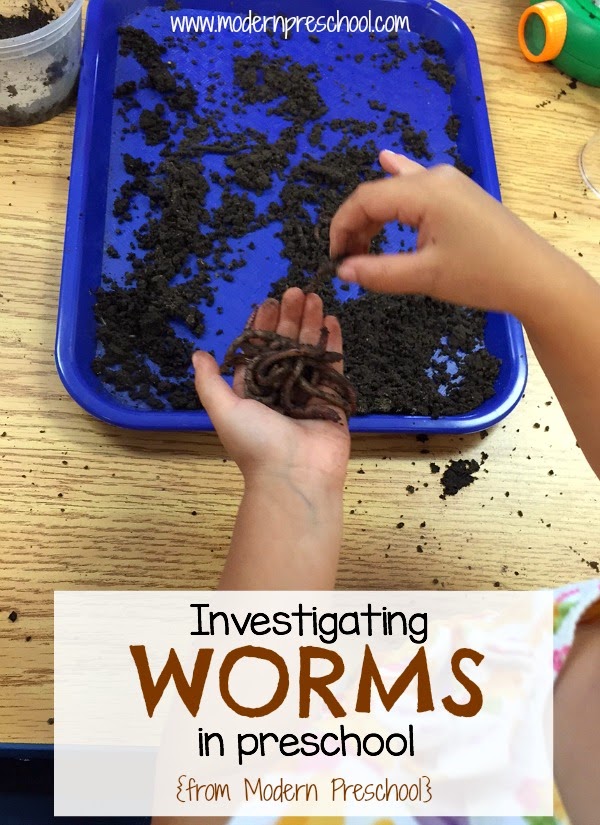 Worms are wiggly!  They were sneaking off the scale, all over the table, and climbing over the blocks that the kids set up for them.  The learning and exploring went on for almost an hour.  Most of the preschoolers who were a little nervous at the beginning about these wiggly creatures became brave enough to touch and hold the worms by the end.
Real life science with worms.  Definitely one of those get-your-hands-messy kind of learning experiences that preschoolers benefit from! 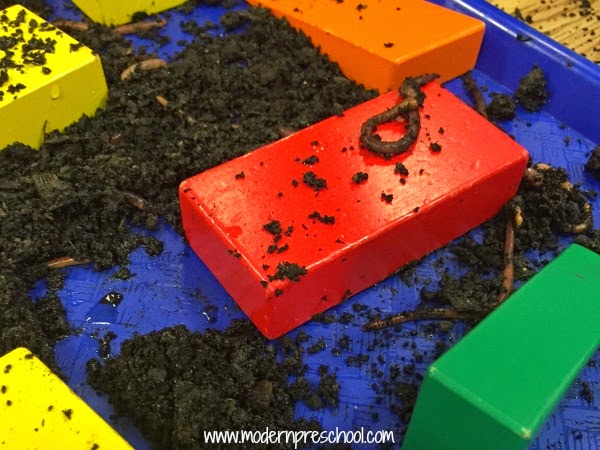 Right outside our classroom door, we have a garden area.  The garden was in the middle of getting spruced up for the spring season, so after a morning full of worm investigating, the preschoolers added the worms to some of the flowers and plants in the garden.  They know that the worms will soften and separate the soil for the plants, so they are helping the new plants too!
Worms.  Some of the best learning we have had all school year. 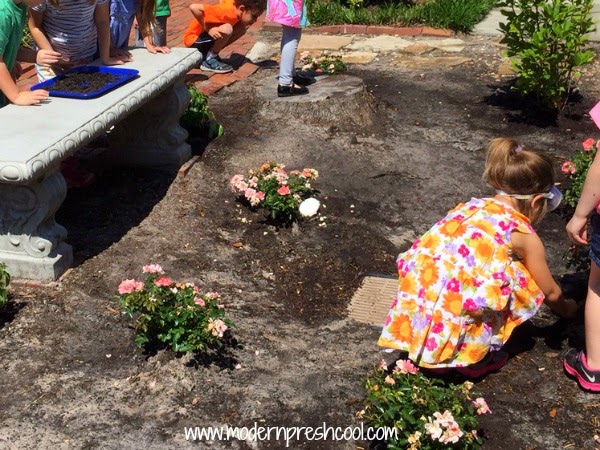 Are you brave enough to let your little learners investigate their own real worms? Post a picture to my Facebook page with the evidence!